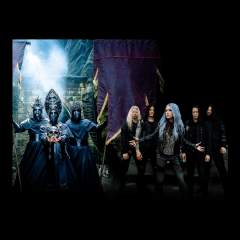 Considered to be one of the leading death metal bands to emerge from Poland in the 1990s, Behemoth were founded by singer/guitarist Nergal (AKA Adam Darski) and have grown to become one of the world’s premier black metal bands.

Just announced - Next year sees them play major gig all over the UK as they embark on an early tour during which they take over Motion at Bristol, O2 Institute Birmingham, O2 Forum in London and O2 Manchester Ritz during February 2018.

Gigantic is thrilled to be able to offer you Behemoth tickets. But as the word spreads the demand grows. So, make sure you are quick off the mark and book your tickets before they are all taken. Placing a booking is made easy as you can visit Gigantic 24/7 using a tablet, computer or smartphone whilst relaxing or when on the go.

Behemoth gig tickets will become available at 10:00 on Monday 6th of August. You can make yourself ready for their release by setting a personal reminder to arrive to you via text message or email with Gigantic.


Starting with the 1995 debut Sventevith (Storming Near the Baltic), Behemoth have produced ten studio albums including their latest outing The Satanist.

“The Satanist is as untamed and direct as its title suggests: a flawless paean to free will and the human spirit.” - The Guardian

“This is a very reflective record that refuses to exist only on one level, and though it's a cliche to say it, the more you put into it, the more you'll get out of it.” - Kerrang!

Gigantic can only offer a limited amount of Behemoth concert tickets and we expect them to sell out so quickly. So, take advantage of our excellent customer service who are ready to help you choose from our ever-growing list of the hottest gig tickets and make a stress-free booking to enjoy all your favourite acts.