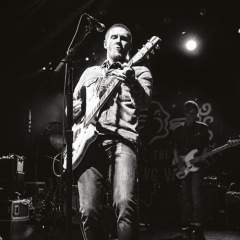 Singer and song writer Brian Fallon came to the public’s attention as the lead vocalist of rock band The Gaslight Anthem. Extremely creative, he has recorded both the album Painkillers and the EP Georgia whilst working as a solo artist within twelve months.

Born in the state of New Jersey, Fallon began playing guitar as a teen having an early introduction to music through his mother; a member of the sixties band The Group Folk Singers. At the age of 17 he released his cassette The Coffeehouse Sessions, working under the name No Release. Limited to only 200 tracks, the 17 tracks were an early sign of promise.

He began to become involved in various projects including assisting recording the band Amping Copper, recording an EP as Cincinnati Rail Tie and founding the band This Charming Man.

In 2006 Fallon became a founding member of The Gaslight Anthem. The amazing band have released five studio albums including Sink Or Swim, The ’59 Sound, American Slang, Handwritten and their latest release; Get hurt. The New Jersey folk punk four-piece are currently on indefinite hiatus.

Fallon began to record once again as a solo artist in 2015, informing fans of his intentions via his Instagram page. He recorded and released the album Painkillers the same year, releasing the EP Painkillers on Record Store Day in April the following year. He now performs with his new band; The Crowes.

Brian Fallon tickets are currently available through Gigantic. So don’t delay and get yours today!

Fallon has just announced shows; An Evening With Brian Fallon: Songs From The Hymnal. This acoustic / piano tour takes him to Wylam Brewery at Newcastle, St. Georges Church at Brighton, Komedia Bath and Tramshed in Cardiff during February of 2019.

Gig tickets are always limited so book early to avoid experiencing any disappointment.