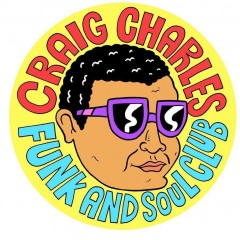 Actor, comedian, musician, poet and presenter; Craig Charles is a man of many talents. Having played with many bands, Charles has a good ear for the best tunes and in 2012 formed The Craig Charles Funk And Soul Club.

“This is how we roll, we play funk and we play soul!”

Get ready, because he is just about to hi the road and explode this December at The Empire in Coventry and Cambridge Junction.
The big CC is already looking to a massive new year with a huge night at The Roadmender in Northampton on Friday 19th of April 2019.

Craig Charles tickets are sure to sell very fast so make sure you book yours before they are all snatched up.


Craig’s career began at the age of 12 when he won The Guardian Poetry Award. The runner up was 33 years old! He performed as a warm-up act for bands in Liverpool, and made his TV debut performing his poetry on Riverside and Wogan.

Craig is recognised the world over as Dave Lister - the curry-devouring, last-surviving human in BBC 2’s hugely popular sci-fi sitcom Red Dwarf. He has also been seen and heard as a performer or presenter on a whole host of programmes as diverse as Through The Keyhole, The Bill, Radio 4’s Kaleidoscope and of course the irresistible carnage of Robot Wars.

In the past Craig has been a member of the Royal Shakespeare Company, has toured his stand-up show and done panto (in Dick Whittington). He continues to front his own band, The Eye.
“The crowd lapped it up and danced their socks off and Craig seemed to enjoy every minute.” - Nottingham Post

“From there the seemingly jet propelled jockey has carved out a career as a dynamic, knowledgeable and frankly electric DJ, merging classic tracks with modern numbers.” - Skiddle

“For three hours the DJ would not relent, feeding off the intensity of the night throwing sonic curve balls of genres you never knew would be dancing bed-fellows. It’s difficult to imagine the whole night without being on that dancefloor.” - Yorkshire Evening Post

With only limited amounts of Craig Charles Fuck And Soul Club tickets available, we do urge you to act fast and book early. Gigantic has been providing excellent customer service for ten years, so you can be sure we are the right place to book your essential gig tickets whenever you are planning your big night out.