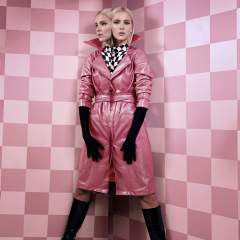 Hailing from Tromsø in the far north of Norway, Dagny’s music has a quirky, endearing pop sound infused with a huge dose of contagious youthful optimism. The daughter of two Jazz musicians, she has consistently impressed ever since her breakthrough debut single ‘Backbeat‘ towards the end of 2015.

After a high-profile Beats 1 premiere by tastemaker Zane Lowe, ‘Backbeat‘ transformed into a veritable smash, racking up a staggering 33 million Spotify streams. Apple, Spotify, and Tidal all pegged her as an “Artist To Watch” and Interview Magazine, NME, Nylon, Forbes, and more heaped praise on her debut EP ‘Ultraviolet’.

Dagny's joyful and exuberant personality bursts through in her music, “I’m constantly pushing myself to be more open, daring, and super true,” she admits.“ I’m telling real stories & the youthful optimism is there because I constantly want to celebrate life.”

During 2017 Dagny co-wrote with Ludvig Söderberg (Tove Lo, Ellie Goulding) and Alx Reuterskiöld (Tove Lo, Zara Larsson) In May resulting in her most intimate song to date, ’Wearing Nothing’, a song in which she bares it all - musically and emotionally. Driven by propulsive percussion, a dancefloor-ready stomp, lithe guitars, and sultry, shimmering production, the track quickly snaps into an unforgettable chant, “When I’m with you I feel like wearing nothing”. The international music press loved it, with VEVO naming her a ‘One to Watch’ in 2017. The song was nominated for ‘Song of The Year’ at the Norwegian Grammys (Spellemanprisen). Follow up single ‘Love You Like That’, co-written with Jason Gill (Tove Lo, BB Rexha) quickly gained commercial radio success, and was added to multiple international playlists including Noway’s P3 A list. Billboard named ‘Love You Like That’ as one of its ‘Best songs of 2017’ and also named Dagny as one of their ’10 Pop Stars to Watch’ for 2018.

Dagny toured extensively in Europe & the US, playing over 35 festivals during the summer of 2017. In late August, US band Lany invited her to join them on their extensive North American tour, visiting over 33 cities in seven weeks. The tour included two nights at The Wiltern theatre in LA & three nights at Irving Plaza in NYC, where she gained an army of new fans. Brand endorsements have come from international make-up house ‘Make Up Forever’ & US consumer chain Target.

Dagny’s story is just beginning to unfold. With 2018 headline tours planned in the US, Europe & Scandinavia and more music on the horizon, she’s got a big year ahead. “Every time I release something, it feels a little bit more like me,” She smiles. “I grow as an artist - It all comes from the songs. I hope people can listen to my music and feel happier. I really just want to inspire confidence. Maybe you put on my music and can walk with your head up a little higher - or run down the street naked. ”