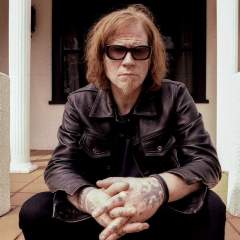 Mark Lanegan has been a vital part of American alternative rock for over three decades. After rising to prominence with seminal grunge band Screaming Tree, Lanegan also began performing as a solo artist building on his cult status. He continues to write and record with the backing of his very own band. He has collaborated with Queens Of The Stone Age.

“There's no faking this kind of quality.” - Classic Rock Magazine

“Lanegan's lyrics are poetic, well thought out and devastatingly honest, making this more a serious artistic account than some braggadocio bullshit. And then add to that the fact the music is just fantastic.” - Playlouder

Mark Lanegan is joined by his band for exciting upcoming headline dates. See him perform at Bristol Trinity, Norwich Waterfront and Wulfrun Hall at Wolverhampton during November, and then O2 Academy Oxford, Engine Rooms at Southampton, Concorde 2 at Brighton and KOKO in London during December 2017.

Everyone is after Mark Lanegan tickets so be sure to book yours before they are all gone.

He has released ten albums as a solo artist and the titles include;

We only have limited supplies of Mark Lanegan concert tickets so book yours before they are all gone. Gigantic offers you great customer service on an amazing array of essential gig tickets so always make your booking with us when looking for your next big night out.