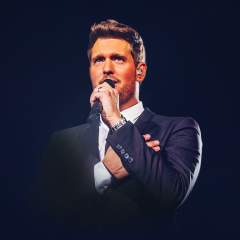 Close your eyes at Michael Bublé concerts and you’d be forgiven for thinking you’d stepped back in time to a bygone era. With his smooth, Sinatra-like vocals and full band orchestra, this Canadian crooner evokes the sounds of the 1950s spectacularly. He looks the part too. When he steps on stage, invariably greeted by the whoops and squeals of adoring fans, Michael Bublé is almost always adorned in a sharp suit and shiny shoes, along with a beaming grin big enough to match his impressive, baritone voice.

Gigantic is very excited to able to be able to offer you Michael Buble tickets - but as word spreads the demand grows so please book yours early so that you do not miss out. Fortunately, place your order with Gigantic is easy as you can book your gig tickets 24/7 using a smartphone, tablet or computer at home or on the go.


Thanks to his musical talent, boyish good looks and cheeky onstage charm, demand for Michael Bublé tickets is always high. In 2013, the performer played 10 sell-out gigs at London’s O2 Arena as part of a worldwide tour. This was one of the longest runs ever performed at the 20,000-capacity venue by a male solo artist. The performer has also sold more than 50 million albums worldwide.

Born in Burnaby, Canada in 1975, Bublé’s love of music began at an early age. By three or four, he was listening to the Bing Crosby records that his mother played and he describes this as his introduction to jazz, melodies and harmonies. During his illustrious career, he has won a number of accolades, including four Grammy Awards and multiple Juno Awards. His first LP, called ‘It’s Time’, was released in 2005 and, since then, the star has recorded seven further albums.


Bublé’s most recent LP, ‘Nobody but Me’ was released in October 2016 which has subsequently been certified Platinum and satisfied both fans and critics.

“This definitely feels like a regular Bublé album, but it’s definitely a high quality one that shows off his multitude of talents well.” - Renowned For Sound

There are only limited supplies of Michael Buble concert tickets being made available by the event promoters so with the demand ever growing you will need to act fast or risk missing out. Gigantic is the home of a massive array of essential gig tickets, so take advantage of our excellent customer services and booking your big night out with us.