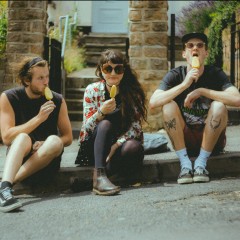 Muncie Girls are the raw essence of punk you have been craving for! Do not miss your chance to see them make a headline performance near you. Touring later in the year in support of their new album Fixed Ideals, you can see them play at The Deaf Institute in Manchester, The Cuban Embassy at Birmingham and Nottingham’s iconic Rock City in September and then The Borderline in London plus Waterfront Studio at Norwich during October 2018.

Make sure you act fast and get your hands-on Muncie Girls tickets before they all go. You can make a gig ticket order with Gigantic 24/7 using a tablet, smartphone or tablet.

Exeter trio Muncie Girls released their highly acclaimed debut album ‘From Caplan To Belsize’ on 4th March, 2016 via Specialist Subject Records in the UK. Animal Style Records released the album in the US and Uncle M had the honours over in Germany. The record has received much attention and plaudits from the likes of Kerrang!, Rock Sound, Upset, Noisey, DIY, The Line of Best Fit & Punktastic. Muncie Girls were also nominated for ‘Best British Newcomer’ at the Kerrang! Awards 2016. Recent singles have received plays on BBC Radio 1, Kerrang! Radio, Amazing Radio & Scuzz TV.

“It's a record you'll return to again and again, such is the strength of the songs.” - Kerrang!

“Muncie Girls have created a fresh touch to the mixture of indie and punk. The band has officially mastered their sound and made ten songs the band should truly be proud of.” - Punknews.org

With only limited amounts of Muncie Girls concert tickets being made available, it really is important to book early or risk missing out. Being home to so many essential gig tickets, check the Gigantic site regularly and take advantage of our excellent customer services to make a stress-free booking for your big night out.