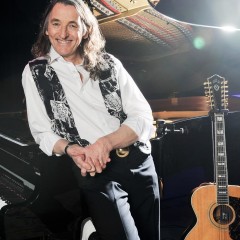 Supertramp star and supremely successful solo musician Roger Hodgson looks forward to a springtime tour in May of 2017. A pioneer of progressive rock, his distinctive tenor voice and marked talent for melodies has seen him become world famous and earn international acclaim.

Gifted a guitar at the age of 12 from his father amidst his parent’s divorce, Hodgson took the instrument to boarding school and was taught only three chords by a teacher in attendance. He quickly became very adept at playing and within a year gave his first concert of nine original songs to the school. After leaving school he joined the band People Like Us followed by a stint in pop band Argosy.

Following the break of the Argosy, Hodgson beat off a massive 92 other competitors who also answered the ad in Melody maker to successfully audition to become the guitarist for Supertramp, only to pass on to the role to Richard Palmer the following day, accepting the position for bassist instead.

Supertramp would soon become one of the world’s leading prog rock bands, selling more than 60 million albums, including the massive hit record Breakfast In America which has singularly sold more than 20 million copies. As the band was based in Los Angeles, Hodgson would lose the intimate connection with the fellow members when he moved with his family to northern California and soon started to think about producing solo material.

His first release was In The Eye Of The Storm and was an immediate success following leaving the band, selling over 2 million copies. His success continued with the release of the albums Hai Hai and Open The Door.