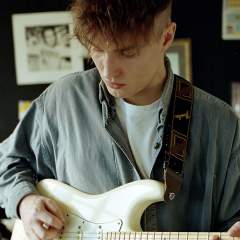 Songwriter Sam Fender is catching everyone’s eye and is the songwriter everyone is talking about.

Following the release of his debut album ‘Hypersonic Missiles’, he heads out on a tour which takes him to O2 Institute Birmingham and SWX and Bristol during May. Then later in the year, he also takes over Rock City in Nottingham on Tuesday 26th of November 2019.

Next year, he takes over Alexandra Palace in London, De Montford Hall at Leicester and Cardiff Motorpoint Arena during March 2020.

With everyone excited at the prospect of getting their hands on their Sam Fender tickets, you will need to act fast and book early or you may well miss out. All gig ticket orders can be placed 24/7 whilst relaxing at home or out and about using a tablet, computer or smartphone.

With demand so high, it makes sense to put yourself ahead of the rest by setting a personal reminder with Gigantic. This way, we can alert you with a text message or an email when they become available at 09:00 on Friday 27th of September.