Catfish And The Bottlemen tickets 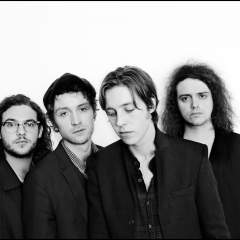 Catfish And The Bottlemen are the future of British rock and roll. They have already received the Brit Award for Best Breakthrough Act and the BBC Introducing Award at the first BBC Music Awards.

Later in the year sees them play Coventry Ericsson Indoor Arena and Cardiff Motorpoint Arena during May 2019.

With the excitement building amongst fans, the demand for Catfish And The Bottlemen tickets is constantly growing so you will need to act fast and book yours before they all go. You can place your gig tickets order 24/7 using a tablet, computer or smartphone where ever you are; be it relaxing at home or busy and on the go.

With interest so high, it makes sense to set a personal reminder with Gigantic right now. That way, we can alert you with a text message or an email shortly before they are released at 10:00 on Friday 1st of February.


The band formed in Llandudno, North Wales in 2007 and is currently comprised of drummer Bob Hall, guitarists Johnny Bond and Van McCann on vocals with Benji Blakeway on bass.

They quickly signed to Communion Records in 2013 and released a string of fantastic singles; Homesick, Rango and Pacifer which lead to them being snatched up by Island Records.

Their first album was titled The Balcony and was released in September of 2014. The record was bold, brash and unapologetically full of swagger. It was noted by critics to be highly polished and was nominated for the Welsh Music Prize 2014 - 2015. The record charted at #10 and has been certified Gold in the UK. It has also sold well over 37,000 copies in the US.

Last year saw the release of their blisteringly hot new album The Ride and will be playing some truly amazing gigs and festivals in order to show it off.

We are really excited to be able to offer you Catfish And The Bottlemen concert tickets, but as we only have limited supplies you really will have to act fast and book before they are all snatched up. Gigantic has a well-earned reputation for being the best place to choose from a wide range of essential gig tickets and providing excellent customer service, and so we have been bestowed the Nottingham Post illustrious ‘Retail Business of the Year 2017’. So, you know we are the right place to come whenever you are booking your big night out.