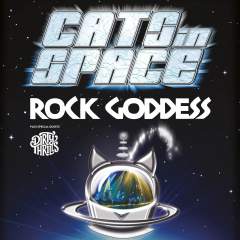 Pushing power rock into the 21st century, Cats In Space are the band you need in your life. Through their many festival appearances and headline performances they have proved to be one of the most exciting acts to hit the stage in many years.

They have just announced a huge Autumn tour to the sheer delight of their many fans. Their unmissable headline dates include two nights at The Borderline in London, iconic Nottingham venue Rock City, O2 Academy2 Birmingham, Bristol Fleece, The Haunt at Brighton, Manchester Academy 3 before returning for a third night at The Borderline in London all during September, 2017.

With a strong loyal fanbase eagerly awaiting their next performance, demand for Cats In Space tickets is high so you will need to be quick and book yours before they are all snapped up. You can place your gig tickets order with Gigantic using your smartphone, computer or tablet.

Their arrival has been heralded with the release of their debut album titled Too Many Gods.

“This is a fantastic album and hugely enjoyable to listen to. The 70′s power pop/rock revival starts here!” - Get Ready To Rock!

It has been followed by second album Rip It Up which was released earlier in the year.

We are only able to offer a limited amount of Cats In Space concert tickets so you will need to act fast before they all go. Gigantic offers a wide range of essential gig tickets plus excellent customer service, and with ten years of experience you can be sure we are the right place to come whenever you are booking your big night out.