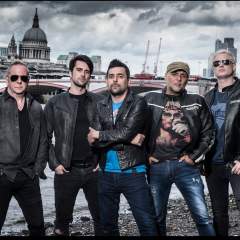 Since forming in Glasgow in 1987, GUN have become one of Britain’s best loved rock bands. With over 1 million album sales worldwide, hit singles such as “Better Days” and “Word up” and tours with the likes of The Rolling Stones, Def Leppard , The Cult, Lynyrd Skynyrd and Bon Jovi. The band disbanded in 1997 and reform ed in 2008 , releasing a series of critically acclaimed albums and re - establishing themselves as consummate songwriters and performers.

September 2017 saw the release of the latest & biggest selling GUN album for 23 years, “Favourite Pleasures”, hitting the UK national charts at number 16. Recorded at the bands Morse Code studios in Paisley, Scotland, the album featured one of the strongest collection of songs in GUN’s career.

2019 sees the 30th anniversary of the release of Gun’s epic debut “Taking On The World ” . To commemorate this land mark the band are set to release a Best Of (Originals and Cover versions) double album featuring all the classics that GUN are known for.

They now announce a huge tour in support, with huge headline dates at Portland Arms in Cambridge on the 31st of March, then Rescue Rooms at Nottingham, The Globe at Cardiff, Night People at Manchester, Studio 5 Live @ Jam on Top in Keighley and The Cluny at Newcastle during April 2020.