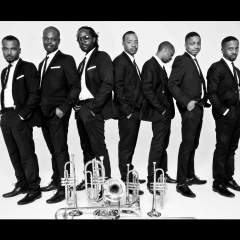 Hypnotic Brass Ensemble is a family of 8 blood brothers, sons of jazz trumpeter/composer Philip Cohran (Sun Ra, co-founder of AACM, mentor to Earth, Wind & Fire), who were raised on the south-side of Chicago under the rigorous training methods their musically talented parents.
They have worked alongside Mos Def, Ghostface Killah, Maxwell, Erykah Badu, Robert Glasper, Chris Dave, Tony Allen amongst many more. Their debut album was released by Blur's Damon Albarn on his Honest Jon's record label. A live powerhouse, the band were recently asked to back upPrince in concert.
Recently they have appeared on BBC2's "Later with Jools", headlined a sold out Sydney Opera House concert and have had a track on the "The Hunger Games" soundtrack. A new documentary "Brothers Hypnotic" recently aired on PBS in the USA and will soon see a theatrical release in the UK.