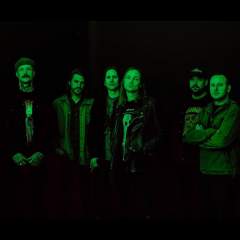 Norwegian metal band Kvelertak are at the forefront of extreme noise and hard rock. The band dominates the musical landscape of their home country and they continue to grow into an unstoppable force for rock. Their famous fans include Metallica front James Hetfield.

Their debut album was entitled Kvelertak and was released in 2010. The record shot to #3 in the Norwegian album charts and has now been certified Gold after having sold more than 15,000 copies in their homeland alone. Their certification was presented to them by Dave Grohl whilst they supported Foo Fighters on their tour. The album contains the song Mjød which was featured in the hit independent film Troll Hunter.

Having blasted into the public’s consciousness, Kvelertak were presented with two highly prestigious Spellemannprisen Awards for Best Newcomer and Best Rock Band.

The band followed the initial success with second album Meir. Released in 2013, the record saw the band grow even greater heights and they topped the charts at #1 in their country.

Their latest release is their third studio album Nattesferd. Hitting #2 in the charts of their native country of Norway, the new material is expected to feature heavily in their upcoming live shows.

Kvelertak tickets are available through Gigantic - so book today!

The supreme metal band will be playing at rock festivals Leeds & Reading which take place at their respective sites from Friday 26th until Sunday 28th of August.

On Monday 5th of December they headline at Electric Ballroom in London.

Gig and festival tickets always come in limited amounts so book early to avoid any disappointment.